BUCKSPORT, Maine | August 10, 2020 – Whole Oceans announced today it has opened a new office in Bucksport as the base of the company’s operations. Whole Oceans will be building a state-of-the-art recirculating aquaculture systems (RAS) that will be used to raise Atlantic salmon on the site of the former Verso paper mill in the heart of Bucksport, Maine. 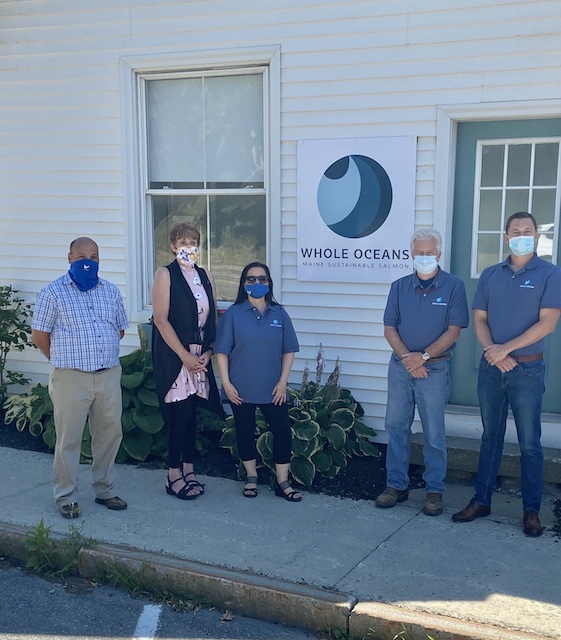 The office, located at 52 Main Street, opened in July. The company’s Portland office closed at that time. Michael Thompson, who recently joined Whole Oceans as Senior Project Coordinator, and Orfa Cabrera, Senior Hatchery Manager, will operate out of the new office.

Jacob Bartlett, CEO of Whole Oceans, said, “We are excited to take one step closer to bringing this new industry to the town of Bucksport and the state of Maine. Joining the downtown business community in Bucksport will help us deepen the relationships we’ve already formed in the community as we look toward a successful future together.”

“The town of Bucksport and the community welcomes Whole Oceans to Main Street as this is one step closer to future growth,” said Susan Lessard, Town Manager of Bucksport.

Currently, The Whole Oceans team is in the pre-construction phase and continues to make progress toward groundbreaking for the Bucksport facility. This phase includes finalizing the details of the design plans and contract negotiations for construction of the project.

Its aquaculture engineers are working on optimizations to the design of the facility. While these optimizations, paired with the pandemic, have caused the team to move the construction start time, the final result will be an improved facility in terms of space utilization, energy usage and fish health.

Meanwhile, Whole Oceans has demolished many of the remaining structures on the former site of the Bucksport paper mill.